Skip to content
Home - The Observatory - Diabetic retinopathy: My brush with blindness

Diabetic retinopathy: My brush with blindness

Jamie Duncan, Vision Australia writer/editor, had never been to an optometrist despite living with diabetes. In this blog he writes about losing his sight in his 30s.

I knew I was in trouble when an optometrist examined my eyes and recoiled in horror at what she saw deep inside them.

Diabetic retinopathy was robbing me of my sight, and I had no idea.

I’d never been to an optometrist before. My vision had become a little blurry and I assumed glasses would fix everything.

Not quite, as it turned out. I got both a new set of specs and an urgent referral to the Royal Victorian Eye and Ear Hospital.

Diabetic retinopathy damages the tiny blood vessels that supply the retina, the nerve tissue within the eye that’s responsible for vision.

The damaged blood vessels can leak blood and fatty deposits that, over time, obscure the patient’s vision.

At the time, I was a 37-year-old journalist, husband and father of five.

My diabetic retinopathy was already well advanced despite only recent and subtle changes to my vision. My retinas were a mess.

A team of ophthalmologists at the Eye and Ear began immediate retinal laser surgery. This involved having thousands of tiny spots burned into my retinas to head off the development of leaks and new, weaker blood vessels that might also bleed.

I had to travel to Melbourne from my home in country Victoria every few weeks and take time off work to undergo the treatments.

At first, it caused small splotches that were an annoyance more than anything, but the damage began to build.

The Eye and Ear team tried eye injections, using a drug that inhibited the development of blood vessels, in conjunction with laser surgery.

Within a few months, I had lost legal driving vision in my left eye but my right eye was more stable.

I consulted Vision Australia, which helped out with some vision aids to keep me reading comfortably at work. 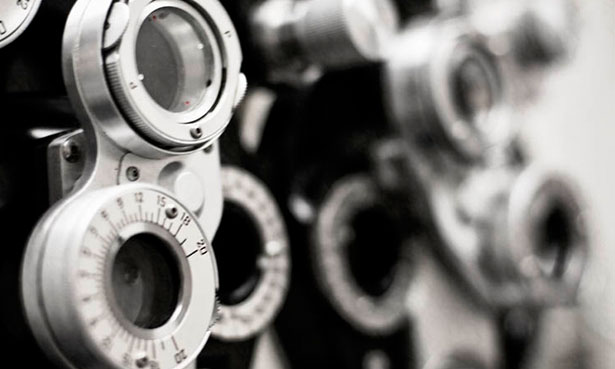 To minimise the impact of treatment on my working life, I sought private ophthalmology care in my town.

I continued having laser surgery for another year until July 2012, a month before my 40th birthday, when a large bleed in my right eye took my remaining sight.

It was agonising. The bleed happened at the office one afternoon. I realised what was happening, dropped everything and raced home without explanation, knowing that soon my vision would be gone.

My vision had been fading for a long time. I thought I was prepared if the worst happened, but that final blow was devastating.

For the first time, I was frightened about the future and my place in it. I was now legally blind. I couldn’t read, write or drive. Everything was cloaked in a shifting, brown haze – like a liquid version of a greasy fish shop window.

I was up to my neck in commitments. I couldn’t fathom what the next weeks and months would bring. How would I get around? How would I work? How would I perform basic household tasks? How would I cope with my sudden loss of independence?

The reality really hit home later that evening when I was cradling my four-month-old daughter. Her tiny hand reached up to touch a tear rolling down my cheek, and I realised I couldn’t see her face.

My wife shared my fears but also had to cope with my emotions. It was far tougher on her than she deserved. It was the same with my kids, who saw the mess I was in and sensed the tension in the house.

I still carry a lot of guilt about that.

The next day, I pulled myself together as best I could. I phoned my ophthalmologist, sent out a distress signal to Vision Australia and caught the bus to work to explain to my line manager, the CEO, what had just happened.

My ophthalmologist recommended an invasive surgical procedure, a vitrectomy, in which the vitreous (a jelly-like substance in front of the retina) is removed along with the retinal blood suspended within it and replaced with gas, a saline solution or an oily liquid.

But surgery was at least six weeks away.

Vision Australia arranged for a new workplace assessment to determine what assistive technology equipment I’d need to keep working. Their support and confidence was inspiring.

Within a few days, I’d have ZoomText software to magnify on-screen text, a CCTV camera magnifier for printed text, a hand-held electronic magnifier and a high-visibility keyboard.

Before the equipment arrived, my employer lost patience. Although I’d been very open about my condition well before it deteriorated so dramatically, the boss said my post-bleed performance was worse than he expected and that my job was on the line.

Vision Australia and my ophthalmologist’s practice manager rushed to my defence.

They arranged a meeting with my boss. They explained the ins and outs of my surgery and how, with the right training, my assistive technology equipment would keep me working even if the surgery failed.

Their support kept my employer happy and eased my mind immensely.

I spent the next few weeks bumping down corridors and falling flat on my face on the bus because I couldn’t see to grab anything as the bus roared away from my stop. At least my technology made work easier.

Still, the wait was gruelling and there was no guarantee the surgery would succeed.

After six weeks, I underwent my first vitrectomy on my left eye at a Melbourne hospital. Under this procedure, the patient is initially unconscious but is soon roused for the bulk of the operation, although under heavy sedation.

I was lucid enough to speak to the team during the operation.

Because of the risk of infection, my ophthalmologist operated on one eye rather than both at the same time.

After an overnight stay, I was allowed home with a gas bubble inside my eye to protect the retina as I recovered. It dissipated in a few weeks. Six weeks after surgery, I was back at work.

I had a vitrectomy on my right eye exactly a year later, but some surprise post-operative bleeding a month after the procedure forced a third operation.

It’s now been three years since my last surgery. My vision remains strong enough to do everything I did before diabetic retinopathy darkened my doorway.

I’m doing my best to maintain my blood pressure and blood sugar, key facets of the progression of the disease.

That reminds me – I’m overdue for my next ophthalmic check-up.

Anyone with diabetes should consult an eye health professional like an optometrist or an ophthalmologist every one to two years.

I’m incredibly lucky. My vision was restored, but diabetic retinopathy is one of the top five causes of blindness in Australia.

In December 2016, I joined Vision Australia as a writer/editor.

My brush with blindness, and Vision Australia’s work on my behalf, are part of the reason that I chose to join this organisation.