Skip to content
Home - The Observatory - Opportunity of a lifetime

Opportunity of a lifetime

In May this year, I received news that I was one of seven young Australians to be selected to attend the Conference of States Parties to the United Nations Convention on the Rights of Persons with Disabilities as a member of the Australian Youth Delegation. Held at the United Nations headquarters in New York from 10-12 June, the seventh annual conference was an opportunity for countries that have ratified the Convention to come together to discuss matters relating to the implementation and monitoring of this very important treaty. Attending this event was the opportunity of a lifetime, and an experience that I will never forget. 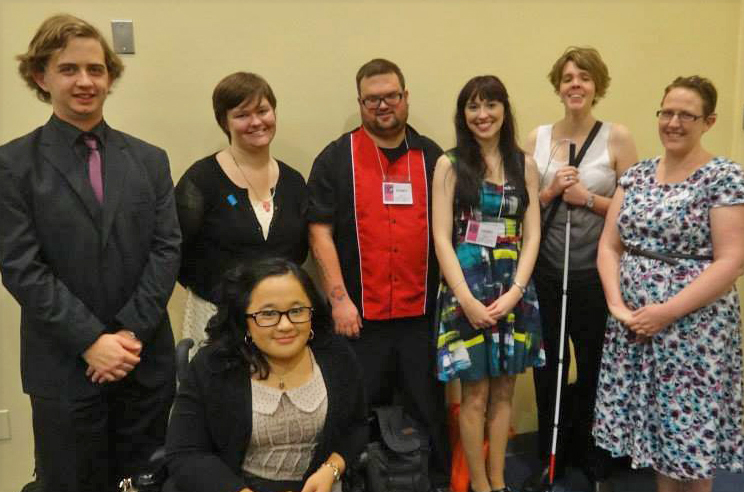 Upon my arrival in the Big Apple, I immediately turned my attention to accessibility, observing as much as I could about the environment and how adequately it accommodated the needs of people who are blind or vision impaired. The “Americans with Disabilities Act” appears to have had a very positive impact in this area. When climbing into the taxi to travel to our hotel from JFK airport, I was delighted to find that the vehicle was equipped with a talking taxi meter for the benefit of people with a print disability. Then upon arriving at my hotel room, I was surprised to find a plaque to the left of the door that included the room number in both Braille and raised tactile print.

We did a little “sightseeing” the day after our arrival in New York, but with my inner nerd bubbling to the surface with increasing vigour, our first day at the United Nations could not come quickly enough. Attending the Conference was both a humbling and awe-inspiring experience. With representatives from 145 nations present at this event, the United Nations is evidence of the fact that we are all inherently the same in human nature and have the same fundamental needs – regardless of race, gender, disability, appearance, age or sexuality. The Conference has given me an insight into what other countries are doing to implement and monitor the Convention, and has prompted me to evaluate the way in which examples of best practice can help inform our advice to government and private industry. I have also developed a better understanding of the spectrum of needs across the whole of the disability sector. This will allow me to ensure that future recommendations that are made in our policy and advocacy work incorporate principles of universal design and will not have the flow-on effect of limiting access for other minority groups.

In addition to the Conference itself, I was able to attend a number of side events on topics of interest – one of which looked at technology and how this is being used to increase the agency of persons with disabilities. One of the panellists, the Editor of Ability Magazine demonstrated how QR codes have been included on the bottom of each page of the magazine to provide quick access to printed material for people who are blind or vision impaired. Using a smart phone, a person who is blind or vision impaired is able to use their camera to detect the QR code on the page. This QR code then automatically links to a website which contains the text that is included on that page of the magazine – which will automatically be read aloud to the user. The second panellist, who worked for the Accessible Solutions Department at Canon gave details about the way in which Canon is making its office equipment, such as scanners, printers and photocopiers accessible to people who are blind or vision impaired through the integration of voice guidance and tactile features on touch screen displays. Finally, we learned how 3D printing is being used to generate tactile models to help aid the education of students who are blind or vision impaired in the classroom and provide greater access to museum and art gallery displays.

Another side event, hosted by the World Blind Union, explored the way in which the Marrakesh Treaty can help to address the book famine experienced by people with a print disability by allowing for the cross-border sharing of published works that have been reproduced in accessible formats. The treaty does not come into effect until it has been ratified by 20 countries, but with the Australian Government having signed since my return from New York, I am hopeful that ratification will soon follow.

My work on the Australian Youth Delegation was an empowering and character-building experience. I welcomed and valued the opportunity to work with a team of dedicated young people who represented the broader needs of people with a disability and to learn about the barriers preventing full inclusion for other groups within the disability sector. One of the main highlights of my time at the United Nations was presenting at the side event that was hosted by our delegation. We spoke to participants about barriers and opportunities for emerging young leaders with disability and each of us had unique insights on this topic that generated some extremely thought-provoking questions from the floor. We were commended for the way in which we approached the topic, with several participants commenting that it was the best side event they had attended, making me feel as though we had truly made a positive contribution through our presence at the United Nations.

My time in New York has helped to shape my views on social justice and has given me a greater appreciation of how fortunate we truly are to live in a developed nation such as Australia. In some developing nations, access to basic necessities such as food, clean water and shelter are scarce, and disability services even more so. Some of these nations are also challenged by significant civil unrest, with people’s lives being under threat every single day. While there may still be some barriers preventing my full participation in certain activities, I feel extremely blessed, as a person who is blind, to reside in a country where I have access to so many opportunities. I am still deeply committed to working towards eliminating the barriers that are faced by Australians who are blind or vision impaired and I am more passionate about this now than ever before; however I feel that we also need to take a moment to reflect on the things that we do have, rather than what we don’t. I am deeply thankful for the rehabilitative services that we have in Australia to assist people with vision loss – because if you had told me eight years ago when I was lying in a hospital bed after losing my sight that one day, I’d be walking into the United Nations, I’d have said you were crazy! And in many other countries, I never would have had the opportunity to get where I am today.

In closing, I would like to extend my thanks to the Australian Human Rights Commission and to People with Disability Australia (PWDA) for their broad support leading up to and throughout the Conference, as well as to Blind Citizens Australia, who supported my application to attend the Conference. Finally, I wish to extend my humble gratitude to the three mentors who accompanied us as part of the Australian Non-Government Delegation: Rosemary Kayess and Jennifer Green from the Australian Centre for Disability Law and Therese Sands from People with Disability Australia (PWDA). Their knowledge, experience and insights have taught me so much and it was an honour to work with each of them.

At the Conference of States Parties, we speak with one voice, and work towards the same common goal: the full inclusion of, and elimination of discrimination against, people with disabilities worldwide.

“Nothing about us without us” – Conference of States Parties, United Nations 2014

For more information about the Australian Youth Delegation to the Conference of States Parties to the United Nations Convention on the Rights of Persons with Disabilities visit the People with Disability Australia website:www.pwd.org.au/issues/australian-dpo-youth-delegation-to-cosp-2014.html

Images in this blog are courtesy of People with Disability Australia and the Australian Youth Delegation.