Finding their way-Orientation and Mobility Training in Timor-Leste

In Timor-Leste people with a disability continue to face many barriers to social and economic inclusion. The Royal Australasian College Of Surgeons, through the  Vision 2020 Australia Global Consortium, has been delivering Orientation and Mobility (O&M) training courses in Timor-Leste since 2010 to help people who are blind or have low vision to increase their safety and independence.

Domingos Gusmao is the President of the East Timor Blind Union. He has participated in several O&M training sessions since early 2011. In July 2013, Domingos participated in further O&M training along with nine other blind or low vision trainers and trainees from three Timorese non-government organisations (East Timor Blind Union, Halibur Deficiente Matan Timor-Leste and Fuan Nabilan). The course also included training for four totally blind cadet trainers who are learning how to teach O&M skills to others in Timor-Leste.

Domingos says the biggest advantage of the O&M training is the ability to go to new places and participate more fully in social activities. As part of the training course, the group visits public places including the Dili waterfront and shopping centres to practice their skills in learning how to find their way around in a new environment. 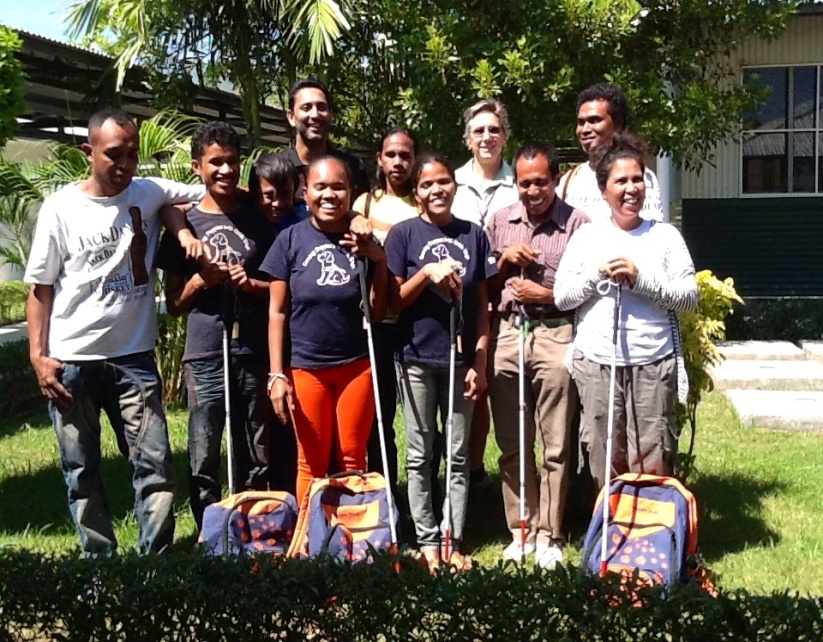 Australian training specialist Bashir Ebrahim, OAM, who volunteers his time as an O&M trainer in Timor Leste, explains that these sessions also provide opportunities for the group to educate the public about the use of white canes and their purpose: “Many people on the street and in the shops asked about what the trainers were doing and also asked about the long canes, it was a great talking point and opportunity for public education.”

Domingos says that one of the biggest problems for blind and low vision people remains safely negotiating Dili’s busy roads. Dili has only recently re-introduced traffic lights and pedestrian crossings are rarely respected by drivers. Domingos says that there is a need for a public awareness campaign to help Timorese people understand how to help a person with visual impairment to safely cross the road.

The East Timor Blind Union, which currently has 20 members, receives no funding to support their everyday running costs, and all office bearers who help to run the Union are volunteers. The Union receives external funding for renovations and training including as part of Royal Australasian College of Surgeons’ Timor Leste Program.

Members of the East Timor Blind Union will participate in music, art and sporting activities to help celebrate this year’s International Day for Persons with a Disability (Tuesday 3 December 2013). When I visited, the Union members were busy in an art class preparing art works which would be displayed at the celebrations. The Timor-Leste celebrations are being organised by the Timor-Leste Disability Working Group.

Over 33,000 people (or 2.8% of the population) were reported as having a vision impairment – defined as a disability which has ‘a substantial long term adverse effect on a person’s ability to carry out usual day to day activities’ – in the 2010 Timor-Leste census. However, according to the World Health Organization, disability figures in Timor-Leste may be under-reported.

The O&M training is provided by the Royal Australasian College of Surgeons, a member of the Vision 2020 Australia Global Consortium. The training also receives support from Guide Dogs Queensland. A further two week follow-up course is scheduled for December 2013, where three participants will complete the final module and become fully qualified cadet trainers, which is a great achievement for Timor-Leste. The training program will continue in 2014 to ensure that blind and low vision people in Timor-Leste continue to have increased safety, independence and inclusion.