The Queen Elizabeth Diamond Jubilee Trust arose from the Commonwealth Heads of Government Meeting (CHOGM) in Perth in late 2011 and is a Commonwealth-wide initiative to raise funds to do good and enduring works as a tribute to Her Majesty the Queen’s outstanding sixty years of public service.

In Australia the Trust is incorporated as the Diamond Jubilee Trust Australia and I am very proud to chair a Board of ten notable Australians dedicated to the work of the Trust.  We also have a distinguished group of sixteen Patrons of the Trust that includes two former prime ministers.  The Trust was launched in Australia at Government House in Sydney in February 2013.

When the Trustees of the Queen Elizabeth Diamond Jubilee Trust, chaired by former UK Prime Minister Sir John Major, were trying to decide what the Trust would do they considered a range of initiatives.  Avoidable blindness and youth emerged as two areas where the Trust could make a lasting contribution that would benefit people of all ages across the Commonwealth.

In the area of avoidable blindness Trachoma was selected because of the international targets to eliminate the disease by 2020, and Diabetic Retinopathy was chosen because it is a growing epidemic in many parts of the Commonwealth.  Retinopathy of prematurity is the third cause of blindness selected, and the Trust will target this in India, because it is an issue that was dealt with in western countries decades ago but is emerging in South Asia as they get wealthier and are using humidicribs and oxygen for premature babies more often.

My key military experiences were command of an infantry rifle company of 120 soldiers in continuous military operations in Vietnam; command of the Special Air Service Regiment including development of its world class counter terrorist capability; command of a Pacific Islands Regiment of Papua New Guinean soldiers in Wewak at Independence; re-equipping the Army for modern operations as Army’s Chief of Materiel; and as Commander in Chief of the ADF in my role as Governor General which gave me the opportunity to visit units from all three services including on operational service in Iraq, Afghanistan, East Timor and the Solomon Islands.

Creating a fitting tribute to The Queen’s sixty year contribution to the people of Commonwealth is a strong motivator for me, especially as a long-serving military officer and Her Majesty’s representative in Western Australia and Australia for twelve years.  My experience both in Australia and in developing countries in our region and further abroad also drives me to want to help those less fortunate than most people in mainstream Australia.

I think this situation is the result of a number of factors but the remoteness of some Indigenous communities has certainly been a major handicap.  I think we need improved coordination between health, eye health, education and other involved government service agencies and Indigenous communities.  I think strengthening educational outcomes and improving housing in indigenous communities needs to be part of the program.  Greater integration of eye health services into mainstream health services is also necessary.  Communities must be actively involved in the solutions and take ownership of their own health outcomes.  If people have information and a way of dealing with the issues, they are better equipped to take control of it themselves.  For example trachoma could be eliminated very quickly if parents ensured all kids had clean hands and faces.  Patently adequate funding that is properly managed is also important.

In Australia the Diamond Jubilee Trust Australia is focused on raising money from, for example, corporations, wealthy individuals, the Australian Defence Force, RSL members and the public.  These funds will be used to expedite the elimination of avoidable blindness and youth development activities across the Commonwealth, including Australia.  The Trust is working with Vision 2020 Australia partners to establish an Australian Trachoma Alliance to help ensure the goal of eliminating trachoma in Australian Indigenous communities is achieved by 2020.  There could also be potential spin-offs from the trachoma elimination program in helping to reduce diabetic retinopathy throughout Australia.

In our region the UK Trust will also work on reducing preventable blindness in some of our close Pacific Island neighbours, such as Fiji, Vanuatu and Solomon Islands.

People often ask me what I would like to do in another life.  I reply that whilst I have really enjoyed this one, if I had the choice I would like to come back as one of the Three Tenors; noting my disappointment in this life that my singing voice in the bathroom seems quite superb, but degrades hopelessly when out of it. 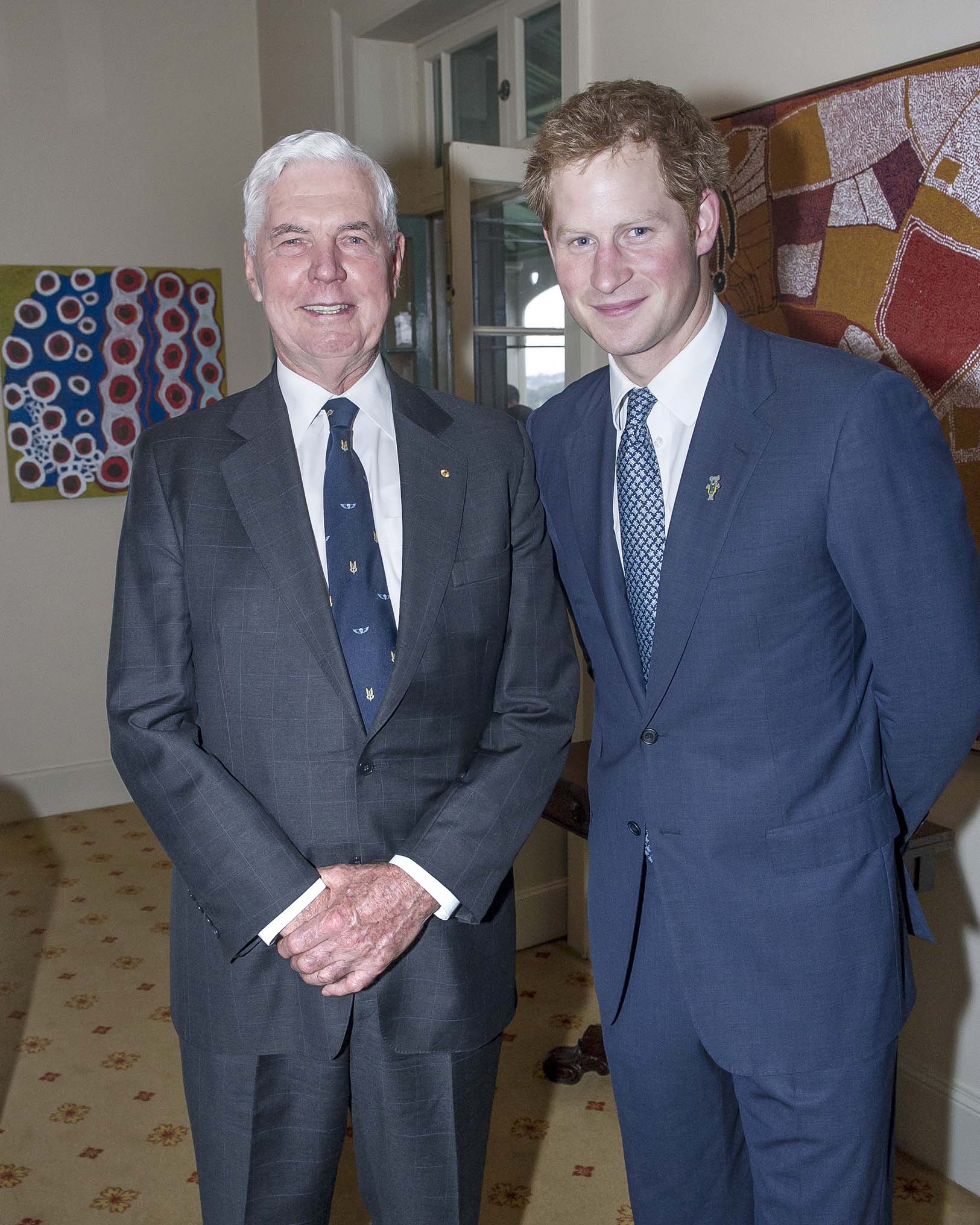 Former Governor General and Chairman of the Queen Elizabeth Diamond Jubilee Trust Australia, Major General Michael Jeffery, briefed Prince Harry on the operations of the Trust when he was in Sydney in October for the International Fleet Review.