A couple of days ago in Geneva countries from around the world resolved to reduce avoidable blindness and vision impairment by 25% by 2019. This fantastic achievement was the result of good strategy and much hard work (in particular, Dr Abdulaziz Al Rajhi, Lesley Podesta and Sanjeev Commar). But above all, the enthusiastic passage of the new global Action Plan for universal eye health 2014-2019 at the World Health Assembly was achieved because the international sector was united in making it happen.

I understand a total of 22 countries spoke very positively in support of the Action Plan and I’m proud that Australia was one of them. Jane Halton, Secretary of the Department of Health and Ageing and a member of the Executive Board of the World Health Organisation (WHO) has not only been highly supportive of the Action Plan, but through her leadership, has been instrumental in achieving this great outcome!

While the passage of the Global Action Plan is another significant milestone for global eye health, the development of a Regional Action Plan is potentially a turning point for the Western Pacific Region.

At very short notice, I recently attended a consultation meeting organised by the World Health Organisation Regional Office for the Western Pacific (WHO/WPRO). Government representatives from across the region including China, Japan, Australia, Cambodia, Vietnam, Malaysia, Mongolia, Laos and many Pacific Island Nations came together to share experiences, discuss challenges and opportunities and identify priority action areas for inclusion in a Regional Plan. Dr Shin Young-soo, Regional Director, WHO/WPRO welcomed participants and explained that the Regional Action Plan will be on the agenda of the Regional Meeting later in the year – a first for the region!

Together with Dr Huynh Tan Phuc, Country Manager, The Fred Hollows Foundation Vietnam and Damian Facciolo, Regional Program Manager, International Agency for the Prevention of Blindness, I presented on VISION 2020: The Right to Sight and the role of international partners.

The three day consultation was jam-packed and included presentations from WHO representatives on linkages for eye health with NCDs, Nutrition and Disability. The longest and most difficult discussion was around indicators with many participants struggling with how to gather the necessary data. It also became clear that a priority for many countries was the need to conduct national prevalence surveys as data was either very old or non-existent. 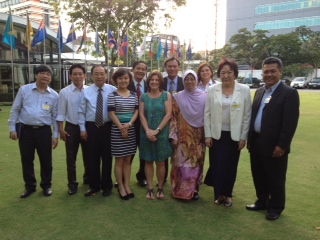 Photograph of participants at the regional meeting.

There is no doubt that both the Global Action Plan and Regional Plan are ambitious, but there is strong support which is a good starting point.  Now it’s up to governments to implement the Plan’s recommendations so around the globe avoidable blindness and vision impairment will be significantly reduced and hundreds of thousands of people will have their sight saved or restored.