Avril Cronk, Manager of Communications and Congresses for the Royal Australian and New Zealand College of Ophthalmologists (RANZCO) , blogs about the recent RANZCO Congress held in Melbourne.

RANZCO held its 44th Annual Scientific Congress from the 22-28 November, 2012 on the banks of the Yarra River, at the Melbourne Convention and Exhibition Centre (MCEC).

The 2012 Congress was huge, in fact we believe it to be our largest to date, with over 2000 people in attendance. We were lucky with the venue; the recently built MCEC was more than able to cater for our large numbers. We took advantage of its cutting-edge audio visual capabilities by trialling tweeting and live polling in some sessions, which was well adopted.

On the first day of scientific sessions, Mr Ian Murdoch (UK) gave an enthralling lecture titled Vision 2020 and the Glaucoma’s.  Ian discussed the challenges presented by the many aspects of the disease in the developed and developing world, and argued that instead of simply calling it ‘Glaucoma’, it would be more appropriate to refer to this complex group of diseasesas ‘The Glaucomas’. 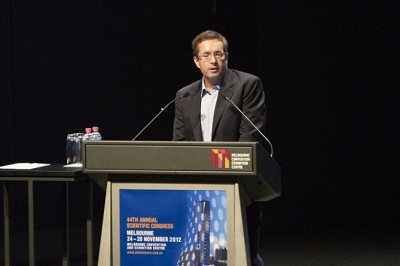 Prof Geoffrey Tabin, co-founder of the Himalayan Cataract Project presented the Hollows lecture. He provided a review of where we stand in the fight against the major blinding conditions in our world. He also discussed how Nepal, the poorest country in South Asia, has been able to develop the best eye care system in the region. 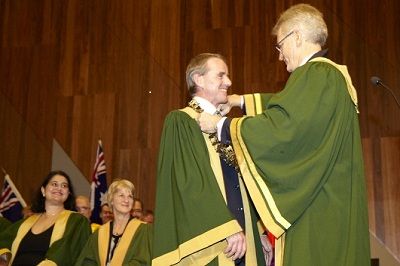 Dr Bill Glasson hands over the Chain of Office to the new elected President Dr Stephen Best of Auckland NZ. Stephen has been involved with RANZCO for many years, as a physiology examiner and a member of; the (Part I) Basic Sciences Board, RANZCO’s Scientific Program Committee, the New Zealand Executive, and was Chair of the NZ Branch. In 2003 he was elected onto the RANZCO Council and the RANZCO College Board. 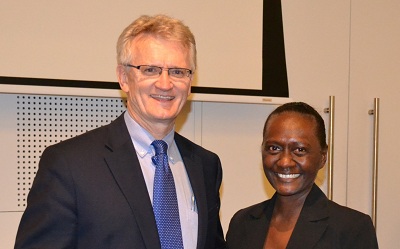 Dr Nola Pikacha of the Solomon Islands, with Dr Bill Glasson. As part of RANZCO’s Annual Scholarship Program four ophthalmologists and trainees from Laos, Fiji and the Solomon Islands attended the Congress.  Recipients attended the Overseas Development Workshop on Ocular and Adnexal trauma. This provided an opportunity to meet with delegates, present cases and take part in informative and interactive sessions. The visiting doctors also attended courses and symposia of the RANZCO Scientific Program as per their interest and had time to tour the extensive trade area and poster gallery. 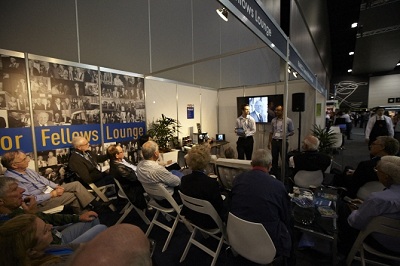 In addition to tweeting there were a number of innovations this year which had our Fellows talking. For the first time RANZCO’s Senior and Retired Fellows had a dedicated space in the exhibition area where they could catch up with colleagues and friends and hear talks at lunch time, such as The iPad, how does it work and will it benefit me?  We also had a speaker and Fellow networking area this year, where Fellows could go after a session to ask speakers further questions. 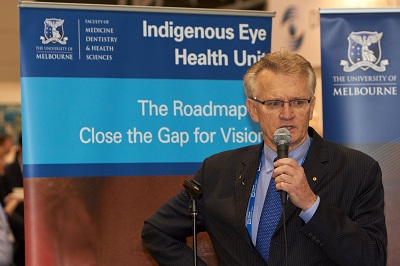 Dr Bill Glasson spoke at the Annual Update on the Implementation of The Roadmap to Close the Gap for Vision. Bill called on the Government to support this very important cause. Aboriginal and Torres Strait Islander Social Justice Commissioner Mick Gooda, who launched the update, and Prof Hugh Taylor emphasised the contribution of eye-health to close the gap between the health of Indigenous and non-Indigenous populations’ in Australia. 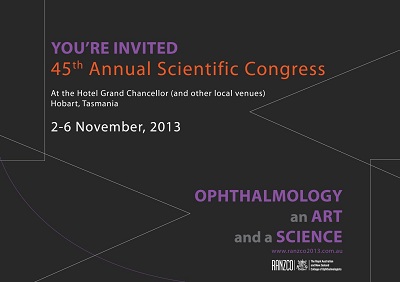 Next year the RANZCO’s Congress will be held in beautiful Hobart Tasmania from 2-6 November. The theme is Ophthalmology an Art and a Science. The Committees involved have planned an exciting scientific and cultural program, including a welcome reception at the world famous Museum of Old and New Art (MONA), local tours, art exhibitions and more.

All photographs courtesy of RANZCO and Photographer Adam Shaw.