Skip to content
Home - The Observatory - Are you one of the 150,000 Australians who are slowly but irreversibly losing their eyesight to glaucoma?

Are you one of the 150,000 Australians who are slowly but irreversibly losing their eyesight to glaucoma?

March 13, 2018September 15, 2019
Tweet
Half of the 300,000 Australians with glaucoma are unaware they have the potentially blinding condition because they lack noticeable symptoms and have not had an eye examination.
During World Glaucoma Week (11 – 17 March), Glaucoma Australia is urging at-risk Australians to have a potentially sight-saving eye test to detect glaucoma, especially those with a family history of glaucoma. If you have a first degree relative with glaucoma, there is up to a 50% chance that you will have it too.
Glaucoma Australia’s CEO Annie Gibbins said only 50 per cent of those with glaucoma had been diagnosed¹.
“That means there are 150,000 Australians who are risking blindness due to undiagnosed glaucoma,” Mrs Gibbins said.
Of particular concern to Glaucoma Australia is the need to raise awareness of the heightened family risk as relatives with a direct family member with glaucoma are 10 times more likely to have glaucoma as those without a hereditary link.
“Anyone from age 40 with a family history of glaucoma, or age 50 with no family history, should make an appointment for a comprehensive eye examination with an optometrist,” Mrs Gibbins said.
Glaucoma is often nicknamed the ‘silent thief of sight’ because it progresses slowly and often without any obvious symptoms. Vision is lost at such a gradual pace, it often goes unnoticed until it is too late.
Glaucoma blindness is irreversible, but fortunately it can be prevented if detected and treated early.
Optometry Australia’s resident optometrist, Luke Arundel, said glaucoma was painless and often symptomless in the early stages. Mr Arundel said: “Glaucoma can sneak up on people as it affects the side (peripheral) vision before central vision and may occur in only one eye initially, meaning that when people have both eyes open the loss of vision in the early stages may not be readily noticeable.
“Ninety per cent of vision loss is preventable or treatable if you detect it early and glaucoma is a great example of this. Once you catch it, you can usually stop vision loss with treatment including eye-drops and more rarely, surgery.
“But left untreated, glaucoma can damage the eye’s optic nerve which transmits visual information to the brain, resulting in vision loss and blindness. If however, we can pick it up early before vision changes, we can stop vision loss and blindness – but we need to be ahead of the game,” he said.
Elizabeth, who was diagnosed with glaucoma 30 years ago, explains how fortunate she is that her glaucoma was detected early.
“I went along to have my glasses checked when I was 33 years old. The very perceptive optometrist picked up that my pressures were high. He asked if other family members had glaucoma, and when I said yes – my mother and aunt both had glaucoma – he sent me straight away to the ophthalmologist my mother went to.
As I was still fairly young it was clever of him to pick it up. Thank heavens! As it was caught early I have not had any loss of vision. Over the years I have also had cataract and laser surgery. Because of the family history my immediate family now gets checked for glaucoma”.
Anyone may develop glaucoma, but incidence increases with age. One in 10,000 babies are born with glaucoma and by age 40, about one in 200 have glaucoma, rising to one in eight people at age 80.
During World Glaucoma Week (11 – 17 March) the message is simple – if someone in your family has glaucoma, get your eyes tested. It’s easy and it just might save your eyesight. Also, if you have glaucoma, one way you can help reduce vision loss from glaucoma is to talk to your family and make sure your first-degree relatives understand that they are at risk and should have a comprehensive eye exam. 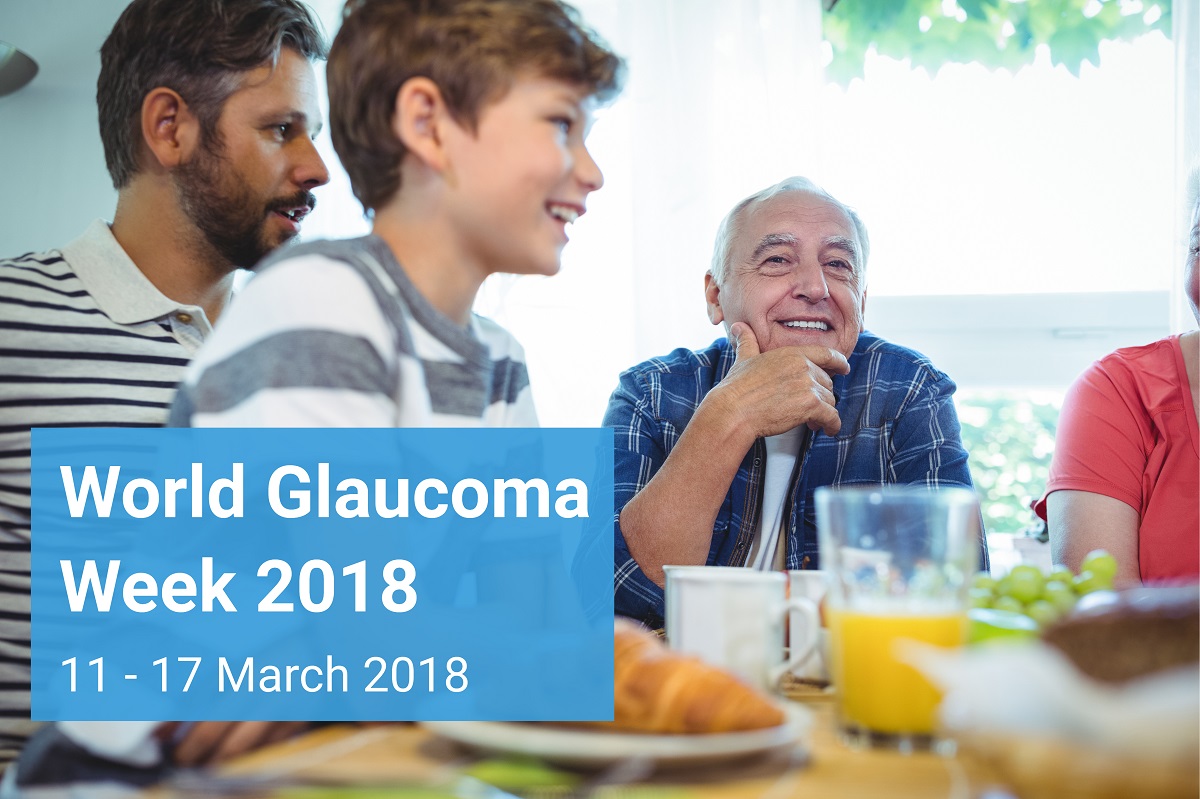 Glaucoma is the name given to a group of eye diseases where vision is lost due to damage to the optic nerve. Generally there are no symptoms or warning signs in the early stages of this eye condition. The loss of sight is usually gradual and a considerable amount of peripheral (side) vision may be lost before there is an awareness of any problem.
The primary problem in glaucoma is damage to the optic nerve.  Intraocular pressure (IOP) is the fluid pressure inside the eye. The level of eye pressure at which there is progressive damage to an optic nerve varies between people: some individuals with high eye pressures do not develop nerve damage, while others with normal eye pressure develop progressive nerve damage.
The best way to protect your sight from glaucoma is to have your eyes tested.
Glaucoma cannot be self-detected, and many people affected by glaucoma may not be aware of any vision loss. It is important to remember that while it is more common as we get older, glaucoma can occur at any age.
Unfortunately there is currently no cure for glaucoma and vision cannot be regained, although early detection and adherence to treatment can halt or significantly slow progression.