Skip to content
Home - The Observatory - You Can’t Ask That: A personal reflection

You Can’t Ask That: A personal reflection

When I was invited to be part of the ABC’s popular TV program You Can’t Ask That last year I accepted, but only after quite a bit of soul searching. First, I had to ask myself why? Why would I want to put myself in a situation where I am required to answer questions – some of them quite confronting – on national television, given I already answer such questions from members of the public on a daily basis? As a singer-songwriter and disability rights activist, I have done my fair share of media, so have long ago let go of any interest in, or expectations of fame or fortune because of these kinds of appearances.

Another consideration was that I was President of Blind Citizens Australia at the time I was selected. Blind Citizens Australia is the national representative voice of Australians who are blind or vision impaired. In that position, I represented a broad range of people from all occupations who happen to be blind or vision impaired, but whose life experiences are not defined by blindness alone. So I felt a lot of pressure to share a range of perspectives, which is difficult to do on a program like You Can’t Ask That because it focuses on personal experiences.

So why did I do it? In the end, it came down to two factors. First, the opportunity to educate, inform and bust some of the myths about blindness and vision impairment to a large and diverse national audience was too important to ignore. 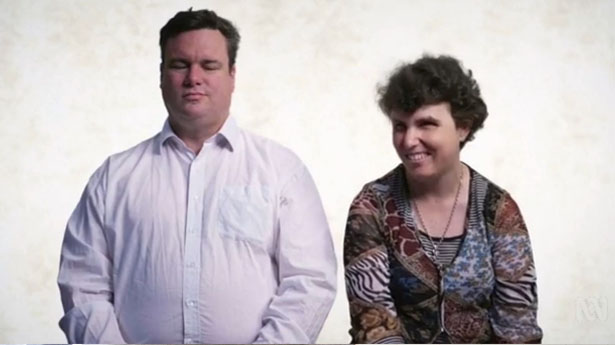 Second, I knew that one of the reasons my husband and I were selected was because we were a blind couple with sighted children. Given how frequently our parenting is the subject of scrutiny and questioning, I wanted this issue to be addressed in the hope that the public will view blind parents in the future more positively.

Since the program aired a couple of weeks ago, many people have asked me what the interview experience was like. The producers did an excellent job of making us feel comfortable and reassuring us that they were keen to present positive messages about blindness. They also did their best to ensure that the process was accessible. For instance, the questions were provided in braille and an attempt was made to audio describe the program on ABC iview.

Unfortunately, the audio description was limited. Perhaps we should not be surprised at this, given the ABC’s stubborn refusal to provide an audio description service on any of its platforms beyond a series of trials.

For the most part, reactions have been very positive. There has been some criticism about the lack of diversity of experiences of blindness among the program guests. My view is that it would be impossible to deal with every scenario in a 30-minute program. What they did capture was the reality that every person’s experience of blindness, from how and when they acquired their vision loss to how they deal with everyday situations, is unique. Even those – like myself – who have been blind since birth had different takes on everything from fashion to what we would like to be able to see.

Some have also criticised the fact that the show was entertaining, suggesting it devalued people who are blind. This occupied my mind for a while, until I started to notice that the most discussed aspects of the program were those which were light hearted and funny. It is well known that humour is an excellent teacher. So, from my perspective, if the fact that audiences were entertained means they will remember the content then the show has done its job.

However, more importantly, I hope that through humour and entertainment strangers feel less fearful of approaching us in the street. I hope that employers look again at our skills and qualifications before dismissing us on the basis of blindness.

But perhaps most importantly, I really hope that if we are dressed like idiots, people will have the courage to tell us and to keep asking the questions they have been too afraid to ask. If you don’t get the reference to blind people dressing like idiots, you’ll have to watch the show which is available on ABC iview.