Skip to content
Home - The Observatory - My Road To Rio

My Road To Rio

August 24, 2016September 15, 2019
Tweet
In August 2014, I made a life changing decision. In part it was a forced choice if I was to achieve my long term goal of becoming the first Australian athlete to medal at a Summer and Winter Paralympics or Olympics. After the Sochi Winter Paralympics where I achieved my second Paralympic winter medal, my focus turned to Rio. Unfortunately, my main event from my career in track and field, long jump had been removed from the Rio program. If I wanted to win a summer Paralympic medal I needed to look elsewhere, to analyse and assess where my best chances were to give me that opportunity at the 2016 Rio Paralympics.
Life as a vision impaired athlete provides many unique challenges, none more greater than the need for a pilot/ guide to help you achieve your goals. It is an incredibly unique, niche role that very few athletes can fulfil due to the large and specific responsibilities they undertake in that position. Therefore, a large focus of my decision was in trying to ascertain which sport had the best system to provide me with this. The other major distinction was finding a sport I could fall in love with. In order to train hard enough and dedicate all of my time and energy to a pursuit, I needed to love it and fully immerse myself in it to negate how little I knew about any new sport I chose. If you are not truly in love with it, the dedication, sacrifices and commitment required to win a Paralympic medal is made almost impossible.
As is the case for dual summer and winter athletes, time is never on your side and it certainly wasn’t on this occasion, I had two years to find a new sport, put all the processes in place so that I could go from a novice to one of the best in the world to allow me to aspire to be a medal contender.
In August 2014, I tried tandem track cycling for the first time. Straight away I knew this would be the sport for me. The speed diving up and down the velodrome boards gave me the same adrenalin rush I experience when I’m flying down a mountain on my skis. The first decision seemed pretty straightforward but there were many challenges that lay ahead from transitioning my body into a brand new sport with new skills and demands on me, to having a custom track tandem bike built to finding a tandem pilot. Like they say, if it was easy everyone would do it.
In 2015, I spent eight months training by myself on an ergo bike developing my skills as we searched for the right person to pilot my bike. It was an incredibly frustrating period knowing that every day I didn’t have a pilot also meant I didn’t have the ability to train on a velodrome due to my vision whilst getting another day closer to the competitions I needed to race in. That eight months I spent hours upon hours on the bike at my gym. It was critical to remain the trust and faith that in time we would find the right person.
I don’t know any other sport where a professional athlete would spend so much of their time away from the event because you don’t have the ability to do it by yourself. A common thread for every vision impaired athlete that shortens your professional career because you’re so reliant on finding a pilot or guide. Independence is a huge social issue for people who are blind or have low vision and these elements are certainly not immune to participation in sport, whether social or elite.
In July 2015, I met Maddie, a young, up and coming track cyclist and she trialled the tandem. Finally, it seemed the long wait was over. In August, she relocated to Melbourne from the Gold Coast fully committing to the role but with time against us and the need to hit certain times along the way to ensure we could get to Rio we had a lot to do.
In December 2015, we debuted at the National Championships. It was pretty simple- make the time here and you automatically qualify for the World Championships. Don’t hit the time and you can’t progress- the steps to the Rio dream over before they would have the chance to really begin. We won the 1km time trial but most importantly rode an automatic qualifying time for selection to the World Championships.
In March 2016, we debuted for Australia becoming World Champions in the Tandem Match Sprint breaking the flying 200m World Record in the process and winning bronze in the 1km Time Trial, the Paralympic event. This result secured our place on the Australian Paralympic Cycling team. 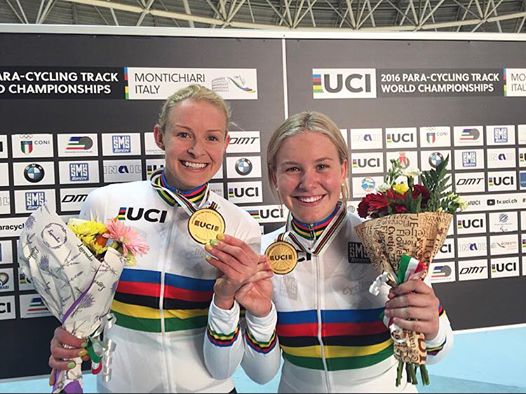 As I sit here, August 2016, just two short years from my first ride on a tandem, I am in Italy for the Para-Cycling team’s staging camp before we head to Rio. It’s nice to reflect on how much Maddie and I have achieved in such a short period of time. In the past five months since World’s we have been able to really ramp up our preparations after the whirlwind of six months trying to gain our Rio birth. There have been a significant amount of people who have helped me over these past two years to get me where I am today. My support team mean everything to me, with so many gaps in my knowledge of this new sport, I rely on them to fill those holes to make me the athlete I aspire to be. They have been with me every step of the way, from the struggles to the triumphs and I’m excited to share that long term goal which is now so imminent.
This will be my fifth Paralympic campaign in eight years, my third Paralympic sport and I could not be more excited for this Rio campaign. Every Paralympics has told a completely different story, extreme highs, extreme lows that have made me the athlete and person I am today. I can not wait to see what the Rio Paralympics has in store for me.
Download WordPress Themes Free
Free Download WordPress Themes
Premium WordPress Themes Download
Premium WordPress Themes Download
download udemy paid course for free
download lava firmware
Download WordPress Themes
lynda course free download
Subscribe via RSS or email