Skip to content
Home - The Observatory - The Polymath. The Planner. The People Person.

The Polymath. The Planner. The People Person.

A tribute to Barry Jones

Some of us have been fortunate to have known Barry Jones for more than half of our lifetime. Others have only become acquainted with him in the last decade as we have embraced Vision 2020 Australia.

We have all enjoyed the benefit of that experience.

And what has that experience been. Barry is an act in three parts. We have experienced:

We have been introduced to the inexhaustible collection of knowledge, great ideas and critical analysis that takes up at least part of his every day

We have been able to enjoy the focus on the real, the actual, detailed practical plans he develops for the benefit of the public

We have glowed in the warmth and friendship of this beautiful human being who was as charming and generous with his time to the old migrant lady in his electorate of Lalor as he is to the rich and powerful like Hugh Taylor who talked Barry into embracing Vision 2020 Australia.

Can I share an example of each of these characteristics?

The polymath. It was in the mid ‘80s that Barry as Science Minister shared with the Australian public his concerns about climate change. I remember one of my Party associates, one of Barry’s Ministerial colleagues telling me that Barry had raised in Cabinet, discussion about sea levels rising. “He’s barmy” he said. “We’re trying to run a Government, and he wants to talk about rising sea levels.” Finally 30 years on, at the G20, the rest of the world has caught up with you Barry.

And second there is the detailed planner. In Opposition in the ‘70s as a Shadow Minister for Transport in the Victorian Parliament he designed the most extraordinarily detailed plan for the future of transport for Victoria. One of the concepts was that the radial rail network needed to be supplemented by concentric connections. Where and how this could occur was explained in great detail. As a fairly new Geography graduate I was enthralled by it. One of his fellow Shadow Ministers responded to my enthusiasm with “it’s over 200 pages long.”

It took until the Bracks Government in the next century for the concentric bus network around Melbourne and the Regional Rail upgrade to begin to see the light of day. I am pleased that 40 years later both major parties and the Greens are promising in this Saturday’s election to put more lines of Barry’s network into place. They will get there eventually Barry.

Finally there is the friendly face. Jennifer Gersbeck, our CEO has given her mum Doreen and her Auntie Molly a real treat today. She has personally paid for them to attend this lunch so that they have the chance to speak with this wonderful man whom they, like a legion of women, have admired for more than a generation. And Barry will give them as much attention as he gave a young American computer geek who, having read “Sleepers Wake”, wanted to meet Barry and had come to Australia to do so. Barry, by then Science Minister, was enthralled by his ideas. He enthused about him, thought he could actually make the technology happen for everyone of us. He sought to introduce him to Hawke and Keating. Neither had the time.

The geek’s name was Bill Gates and his start up was called Microsoft.

Here the polymath, the planner and the people person combine to great effect.

When Barry first engaged me in conversation on this program he raised so many issues. I was unsure about which of the concerns he wanted me to embrace. Did he want me to understand the range and complexity of the eye diseases which he explained in all their complexity? Did he want me to lobby Bob Mc Mullan for foreign aid funding to be directed to eye health in the Pacific Isles and SE Asia? Did he want me to get Clare Martin, the NT Chief Minister and Syd Stirling the Treasurer on side with his proposals for improving ATSI eye health?

Did he want me to do some probono PR on getting people to get their eyes tested? Did he think that I had some magic wand that would create more collaboration between the various health profession streams that serviced punters with eye health problems?

Of course all these issues were on his agenda. So it seemed that if I was to become involved I would have to join the Board and as a business woman help put some pattern and order into priorities.

We were fortunate in my first few months on the Board to be able to recruit Jennifer Gersbeck in the CEO role to create that order and set those priorities. And the Barry/Jennifer partnership has been a powerful force to benefit eye health in this country.

For Barry has been able to use his power for persuasive argument and his networks to convince Governments at all levels, the Health professions and the bureaucrats at state and national level that we must face up to the challenges of eye health and act. In the ‘70s and ‘80s they were not so keen to put their money where his ideas were. Now in the 21st century they are prepared to act with greater urgency to invest in his causes for public good.

His legacy to Vision 2020 Australia is the gift of a funded future to tackle a wide spectrum of eye health issues. His legacy to those of us attending today is that we have been able to share a friendship and a small part of the life and mind of Barry Jones.

Vision 2020 Australia and the Australian people are fortunate that Barry will continue to be associated with us as our Patron.

“Ladies and Gentlemen, I give you one of our finest “National Living Treasures” Barry Jones … 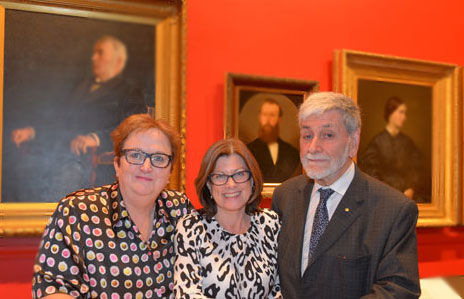 Note: This is an abridged version of the tribute delivered by Sheila O’Sullivan on 27 November 2015