In his home country of Vietnam, Dr Nguyen Chi Dzung is nothing less than a hero, although many may not know it. 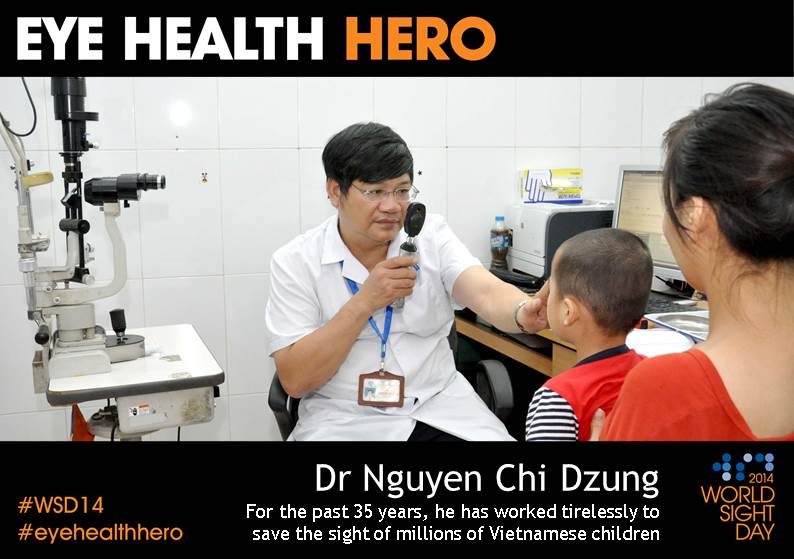 For the past 35 years, he has worked tirelessly to save the sight of millions of Vietnamese children, successfully tackling pandemic eye diseases, such as xerophthalmia from vitamin A deficiency, trachoma and vision impairment due to refractive error.

Nguyen is very proud of the work he does for the children of his country. Despite being close to retirement, he still sees up to 50 children every day.

“Our duty is for our children’s happiness. I’m proud of my contributions and achievements for the children of my nation,” he says.

Nguyen sees patients at his clinic every morning and often performs surgery at this time. Afternoons are set aside for planning, research and teaching—important work that helps bring to fruition the many successful eye health programs in which he is involved.

Nguyen graduated from Ukraine University in 1979 with a degree in paediatric ophthalmology. When he returned to Vietnam, the country was still suffering from the after effects of its long running civil war.

“After the war, many children were suffering from malnutrition and vitamin A deficiency, which can cause blindness,” he says. “This was my first mission.”

From 1979-1983, Nguyen worked alongside the Ministry of Health to screen pre-school children for vitamin A deficiency across the country. With the help of doctors and community workers far and wide, many thousands of children received vitamin A treatment and were prevented from going blind. By 2001, vitamin A deficiency had been completely eradicated in Vietnam’s children.

During this time, Nguyen had begun working on eliminating another eye disease prevalent among Vietnamese children—trachoma.

From 1988-1995, he took a lead role in a nationwide program that brought together national agencies and the medical community, with international support, to tackle the disease head-on.

“We reached out to millions of children and their families, across the cities and provinces, to help them address the causes of trachoma,” Nguyen says. “Having clean water and improving living conditions was really the key.”

By 2005, the program had resulted in the virtual elimination of trachoma in Vietnam, with rates of the disease at less than one per cent.

Over time, the economic and social conditions of Vietnam had greatly improved. But in many areas, myopia and other refractive error conditions remained unaddressed in children, especially those in rural areas. So, Nguyen moved on to his next big challenge—identifying and correcting refractive error in children.

“We have significantly reduced refractive error in children in urban and rural areas,” he says.

Nguyen is now working on a national school eye screening program. This will ensure that refractive error and any other eye conditions in children are picked up and treated early.

So, what does Nguyen do in his spare time? Well, cataract surgery. With 57 per cent of blindness in Vietnamese adults now caused by cataracts, Nguyen says this is his biggest modern-day challenge. But he is not daunted. With international funding and support, he has already helped establish a highly coordinated cataract program that brings together leading eye surgeons across Asia to train new doctors in cataract surgery and community workers in cataract detection. Nguyen at Vietnam National Institute of Ophthalmology states that around 220,000 cataract operations are now performed in Vietnam every year, with more than five million people having benefited from the program since 1991.

Nguyen is now looking forward to retirement, but one suspects he will still continue to be actively involved in what has been his life’s work—saving the sight of millions. In the eyes of those whose sight Nguyen has saved, this quiet achiever is a hero.

Nguyen has been involved with CBM for over 25 years. Nguyen’s professionalism, consistency, advocacy and experience in outreach and community eye health and his willingness to support these activities, have greatly assisted CBM in supporting the poor and people with disability to access eye care services in Vietnam.