From the slums of PNG to life-changing outreach work

Samuel Koim’s story reads like a script for a Hollywood movie. 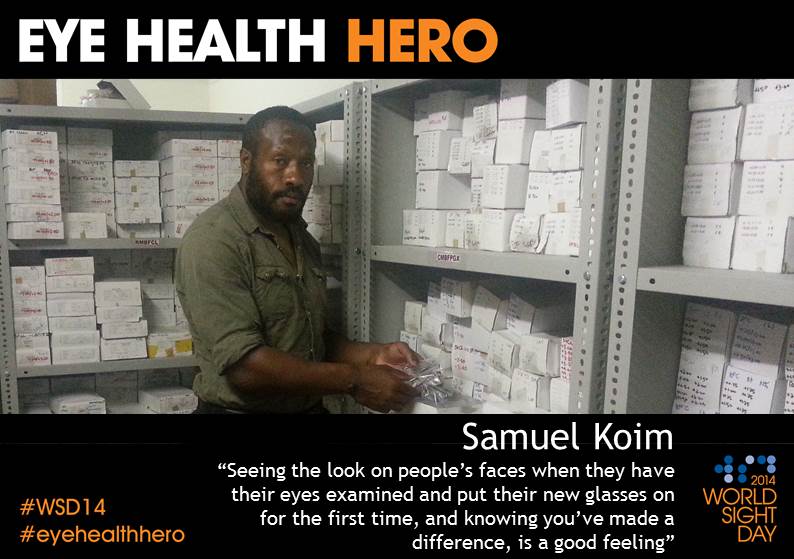 In the space of a year, Samuel Koim went from being among the country’s top performing students studying law at university to living in one of Papua New Guinea’s most notorious slums.

Suspended from university in his first year when he was defrauded by a fellow student, his parents abandoned him saying ‘he’d had his chance’, and he was forced to live on the streets, where some days he had little more than a bottle of water.

In a twist of fate, he was picked up by the Port Moresby Vipers Rugby League team and with some small financial help from his aunt, he later managed to secure a place in a marketing course which he used as a stepping stone to a job at a local newspaper.

“I used to tell my friends I’ve been through all the ups and downs of life,” Samuel says.

And he’s not wrong. For such a young man, Samuel has experienced some incredible lows and some life-changing highs.

Now the 25 year old is using his experience as motivation to help prevent avoidable blindness and improve the lives of those who are vision impaired across Papua New Guinea.

In 2013, Samuel applied for a marketing role with PNG Eye Care, a Non-Government Organisation committed to delivering much-needed eye care services and affordable spectacles in urban, rural and remote areas.

“With the support of the Brien Holden Vision Institute, PNG Eye Care has established a National Spectacle Supply Program, providing low cost spectacles to sites across PNG and runs four Vision Centres that are fully equipped and locally staffed to provide a range of eye care services.

“My role involves ordering spectacles, developing health promotion materials about eye care and coordinating outreach eye clinic schedulesâ”€which is something that I have been instrumental in facilitating since I came onboard,” Samuel says.

“In a country as rugged as PNG, the terrain often makes travel difficult to the vision centres so outreach eye clinics are also coordinated from each vision centre to help improve access for those in remote areas.”

“It can take some people days to get to a vision centre, so bringing a team out to conduct free eye checks in remote villages and schools can be really life changing.”

With refractive error the major cause of vision impairment in Papua New Guinea, the provision of accessible eye care and affordable glasses is integral in reducing avoidable blindness and vision impairment.

Samuel says witnessing first-hand the life-changing transformations that a pair of glasses can make to people’s lives is something he never takes for granted.

“Seeing the look on people’s faces when they have their eyes examined and put their new glasses on for the first time, and knowing you’ve made a difference, is a good feeling,” he says.

“What motivates me a lot is helping those out there who are less fortunate than myself.”

These days, Samuel is back studying law part-time. He is still playing for the Vipers who were Premiers of the PNG NRL last year, and preparing for his new role as Senior Manager at PNG Eye Care.

“I went through a lot. It led me to see that what happens in life is what you decide.”