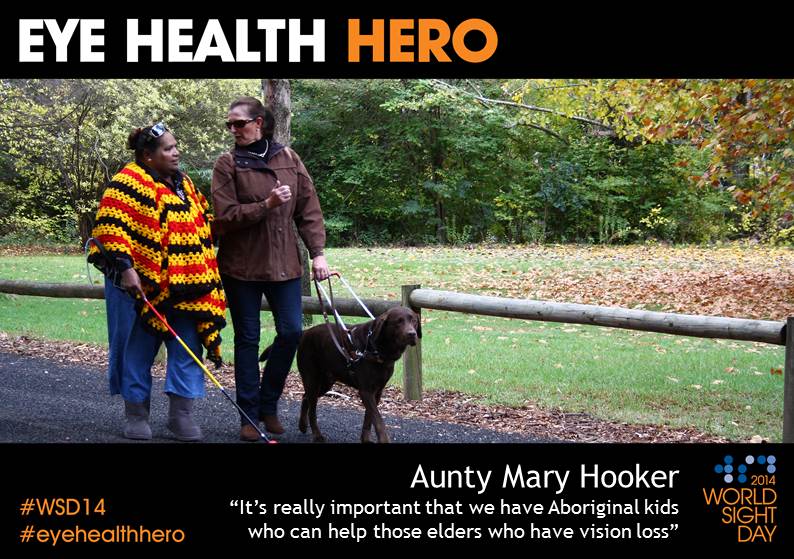 Aunty Mary Hooker is proud of her long cane in the Aboriginal colours of red, black and yellow.

“I can’t see it, but others can,” she says. “And it becomes a talking point and an opportunity for me to tell my story.”

Aunty Mary has an eye condition called diabetic retinopathy, which is a complication of having diabetes. She gradually began losing her vision in 2007, first in the left eye then the right, until in 2010 she was declared legally blind. During this time, she became increasingly isolated as she lost her independence.

“The hardest thing about losing my sight was losing my independence,” she says. “I couldn’t drive or get around, wouldn’t go out anywhere and was feeling very isolated. I couldn’t take a shower by myself, in case I would fall—and one day I even set the house on fire! Eventually my husband had to give up work to look after me.”

“I thought I had to be completely blind to get services and that they would only help me with a dog, and I didn’t want a dog,” she says. “I didn’t know they did cane training. But they have given me wonderful and patient training. Now my cane has become my eyes—I couldn’t live without it.”

In the last few years, Aunty Mary feels as though she has re-gained some of her independence, but her story doesn’t end there.

As part of an awareness raising initiative with Guide Dogs, for the last 12 months, she has been travelling around the country visiting Aboriginal communities to tell her story, and express how important it is to prevent diabetes and blindness, which affects one in six Aboriginal people.

“The young ones really listen to me. We teach them about healthy eating, why it’s important to look after yourself, and what can happen if you don’t—like what has happened to me.

“We teach them about the different eye conditions and what it’s like to be blind, so they can help anyone in their own family who has low vision.

“Part of Aboriginal life has always been the young ones leading the old ones, so we are taking them back to that, looking after their elders.

“Things are slowly changing—in the schools, they get healthy food to eat now. We have even started the Aunty Mary program, which is about healthy eating and exercise. I’m doing it for our future generations.”

Aunty Mary gets an enormous amount of joy from passing on her knowledge and experiences to younger generations. But the time will come, she says, when she will need to pass this work onto others.

“With help from Guide Dogs’ instructors, we are now teaching young Aboriginal kids, and even an Aboriginal police officer in Griffith, some key orientation and mobility skills, such as how to guide someone who is vision impaired. It’s really important that we have Aboriginal kids who can help those elders who have vision loss in their communities. It’s about establishing that trust again.”

While on her travels, Aunty Mary has also been chalking up another achievement. She is knitting an Aboriginal scarf that will be the longest in the world by the Guinness Book of Records—20 metres.

“It’s for Gulliver the (giant model) Guide Dog,” she says. “But I don’t know how we will get it all on him in the end. He can run faster than me!